Coincidence or subconscious? How our emotions impact our furry friends. 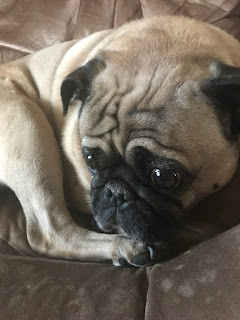 I have always been a big animal lover. As soon as I moved from an apartment to a house, I welcomed my first cat. Through the years my house has been a home for many cats and dogs in need. Some were in the twilight of their animal life and only stayed with me for a brief time while others were abandoned early on in their life, came to live with me when they were young and are still curled up next to me as I type.

When a new member joined the crew there was only a short period of acclimation before everything settled. Sure, Jace, the ginger cat, has never quite appreciated the enthusiasm of Charlie the pug but overall everyone was happy and healthy.

The beginning of this year was really rough on me. I felt lost and unsatisfied in life. I was searching for answers and it was accompanied with an anxiety that was overpowering. I was suddenly questioning everything in my life and secretly began to feel trapped caring for my fur babies. I still loved them the same but I felt like picking up and moving to another country. Escaping. Running away. But I couldn't because I was responsible for them.

Soon after having this very unusual resentment, the cats got sick. Vomiting after eating. I took them to the vet to be treated and the vet decided they must have gotten into something. A month later Huxley, the most mischievous cat of the crew, started gagging and when I went to investigate I pulled a needle and thread out of his throat (that was left were I thought was a very safe place). After a midnight trip to the vet, it was determined Huxley was going to be fine, as it looked like I was able to pull out all of the thread.

A month later my best friend and I went on an evening walk with Charlie the pug. We decided the moon looked lovely and walked down a street we don't often walk down to have a better view. Soon after, Charlie was in the mouth of a much bigger dog being violently shook like a limp stuffed animal. The owner of the other dog was able to tackle his dog, who had pulled out of his collar, and put him in a choke hold. I followed my instincts and pressed on the dogs eyes until Charlie was dropped. Another midnight trip to the vet. But he recovered fine.

More recently it was discovered that Charlie has an ulcer on his eye. He is currently sleeping next to me with a sewn shut third eyelid and a cone to prevent scratching. My intuition is telling me this is more than merely bad luck.

Other than regular check ups and for the ailments of the elderly adoptions, vet visits had been scarce before this. Now I have had four vet emergency this year.

How had I been so lucky for so many years before this? Why was I suddenly at the vets office every month? What is the universe trying to tell me? Or....what have I been telling it?

I am now wondering if there is a correlation between my own subconscious thoughts/feelings and the health of the animals.

Did my resentment of not being able to escape and start over manifest itself as illness and discontent in my pets? Is this a response to the energy I was putting out to the universe? I had the subconscious thought that my animals were a burden, so they became a burden. I didn't consciously treat them any differently, my relationship with them remained the same. Cuddles every day and through the night. I didn't actually have any intention of ever leaving them, but I now wonder is that negative energy was still there lurking in the background.

You don't get what you want in life, you get the energy you put out into the universe returned to you.

This was a harsh lesson I need to learn. Having my animals suffer is a salient cue for me that I can't ignore. I love my animal crew with all my heart and am now aware of the impact my own thoughts and emotions may have on them. It is a sobering reminder of the influence my thoughts and emotions have on others. The good news is that my positive emotions are even more powerful then my negative ones and I am now sending nothing but love and healing energy towards my furry family.

What do you think? Coincidence or subconscious? Let me know in the comments. And say a little prayer for my pug Charlie's eye recovery. I am going to bed every night thinking about him healthy and cone free. Using the laws of the universe to help him have a speedy recovery.

December 06, 2017
The best advice I’ve ever been given: “Get as happy as you can, as often as you can.”
One of biggest roadblocks of my journey came in the form of the elusive alignment requirement.
The word alignment was popping up all over the place.
Let’s start with the basics. What is Alignment?
The definition of Alignment can vary from teacher to teacher. Some, as with Eckhart Tolle, see Alignment as being mentally situated in the present moment. Alignment comes when we are not dwelling on the past or anticipating/worrying about the future.
Mindful meditation is a great exercise to train your brain to slow down and focus on the present. A student of mine combats the stress of university by practicing Yoga. She shared with me that the only time she could slow her brain down and relax was during Yoga class. I immediately recognized this as her Alignment practice! Yoga allowed her to be present not focus on the past or future.
However, one should not simply restrict this exercise to only a 10-30 minute …
Post a Comment
Read more

July 04, 2018
It was a conversation with my doctor, years ago, that first peaked my curiousity about the risk vs. the reward of sun exposure. As I confided in him about the onset of depressive symptoms he asked if they got worse in the wintertime? I practically rolled my eyes at him. I had heard about Seasonal Affective Disorder in my psychology classes, and was certain my symptoms warranted a more serious diagnosis than something called SAD! Still, I agreed that maybe it was possible that I had become more depressed nearing the latter part of winter. But if this was true, I thought, what could possibly be the explanation? Was it because of the shorter, darker days? More time spent inside because of the extreme cold we experience in Canada? What did all these variables have in common?
First, A Few Facts
Ultraviolet Radiation (UVR) is part of the light spectrum that makes it from our favourite star in the sky to the rock we call home. UVR is comprised of 3 main types of UV rays; UVA, UVB, and UVC.
The …
2 comments
Read more

September 25, 2017
So you've watched the secret, or read about the law of attraction? You hear people talking about manifesting and making their dreams come true.  You think, hey if they can do it, so can I! Your biggest desire comes to mind and you set off on the path to bring it into your life. You cut out pictures of your dream car, you put it on your bulletin board and on the bathroom mirror. You start picturing yourself in your new car everyday and the desire becomes stronger. After a month your new car still hasn't arrived. You start wishing harder, more often. You're starting to wonder how your new car is going to come to you. The lottery? A raise at work? You start getting frustrated, feeling a little foolish and maybe even angry. You decide this new age stuff is a bunch of junk and you tear down the pictures from your wall, embarrassed you ever bought into the hype.
I thought the more energy I put into wanting something, the more I thought about how I was going to get it, the more li…
2 comments
Read more

Many have now discovered when they eat is just as (maybe more so...) important as what they eat.
Fasting is no longer a terrible f word met with tsk tsk noises and warnings about slowing metabolisms. In fact, I was just at a market this weekend and when offered samples I would let them know I couldn’t partake because I was fasting, I was astonished at the amount of people who also fasted or had a story about someone else’s fasting success.
Fasting is the quickest way to reduce insulin levels and your body weight set point. Bye bye buddha belly. Studies also point to fasting potentially for longevity enhancement . In fact, longevity improvements are seen with intermittent fasting even without caloric reduction. Fasting can also cause a reduction ininflammation. Inflammation is bad for the joints, the heart, your waist line and can even play a role in cancer and depression.
So how can we see all these great benefits from fasting and yet no decrease in metabolic rate lik…
2 comments
Read more

May 02, 2018
The flow you experience when you are in Alignment is addicting. You’re feeling fantastic, everything seems to be going your way, life’s difficulties feel temporary and you’re motivated to fix them without complaint.
But life requires contrast and as a consequence, once you’ve experienced the magic of being in Alignment, it becomes very frustrating when you’re out and can’t seem to get back in. Your usual get happy tricks aren’t working. Netflix is boring, you’re sick of the music on your playlist, it’s too cold to go for a walk and even a piece of your favourite chocolate just ain’t cutting it today.
Here are my top three tricks to get you back into Alignment.
Accept it (without judgement)
This is number one for a reason. It’s one of the most powerful tools you can use when you’re feeling those negative emotions that are keeping you down. It can also be one of the most difficult steps to take. The good news is that once you start practicing acceptance on a regular basis it becomes alm…
Post a Comment
Read more